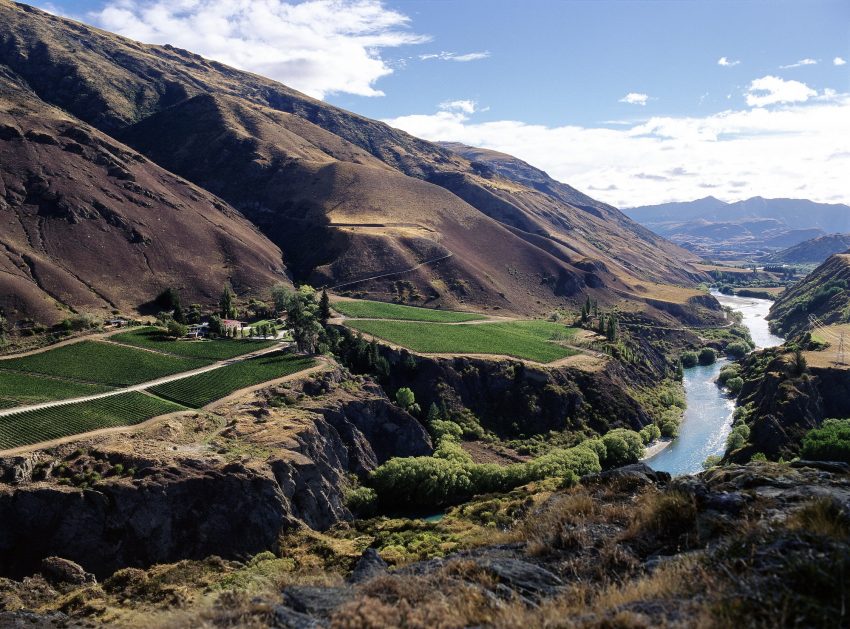 Chard Farm may be located in one of the world’s more spectacular settings for a winery but the wines themselves are resolutely unshowy. Indeed, when tasting Chard Farm’s stable of pinot noirs, it’s hard not to think about John Wallace, winemaker for the past two decades. Understated yet with plenty of character, the thoughtful, dryly amusing John is never found seeking the limelight in a room yet is usually one of its more interesting people to talk to. His personality (though seemingly never his ego) seems to carry across to the wines. These too are calm and never obtrusive and have the sort of confidence that comes with experience and understanding, they’re balanced and eminently drinkable, always retaining a clear sense of place and personality.

Presumably Chard Farm’s (and John’s) enduring connection between place and people has paid good dividends, capturing the essence of Central Otago in a very subtle and satisfying manner. Chard Farm makes five Pinot Noirs (plus another under the Rabbit Ranch label), with fruit mainly drawn from the Lowburn/Parkburn area of the Cromwell Basin, though River Run also has Gibbston fruit from the home vineyards. Paler in colour than most Central Pinots, they have plenty of aroma, flavour plus a pleasing textural element. John thinks increasing vine age is providing better structure via fruit tannins and more harmonious acidity in the wines.

The entry-level 2017 Chard Farm River Run Pinot Noir has enticing aromas of soft cherry, cranberry, raspberries & vanilla cream with touch of wild thyme & star anise. It’s light-bodied and fresh, perhaps lacking a little precision and mid-palate weight compared to its brethren but it has a juicy ripe cherry and red plum jauntiness to the palate with light sandy tannins and a nicely dry savoury finish. The 2017 Chard Farm Mata-Au Pinot Noir is made from the best blocks on estate vineyards in Parkburn and Lowburn (Mata-Au is the Maori name for the Clutha River). Subtle with raspberry, red cherry, thyme and a touch of savoury bacon fat/meaty aromas. The palate is rounded with a pleasing lightness and juicy acidity. Not super complex or intense but there’s enough of both elements. Driven more by acid than tannins, the decent mid-palate covering of fruit keeps it generous and fresh. Easy to drink and enjoy. The trio of three single vineyard wines are a fascinating comparison, quite different in style. The 2017 Chard Farm The Tiger Pinot Noir is floral and spicy with aromas of cranberry, strawberry, rose petal, dried herbs and dusty cocoa and a red-fruited palate with lovely freshness and a lightness of touch. The tannins are firm but very silky and fine-grained, the acidity is juicy and clean, making the wine seems quite taut though the mouth-filling fruit means it is not at all lean, more generous but without any sense of opulence: there’s a strong sense of fineness and silky finesse. Coming from a single block on the Parkburn Viper Vineyard (named for the borage aka viper’s bugloss that is prolific here) the 2017 Chard Farm Viper Vineyard Pinot Noir is characteristically pale and initially less assertive than The Tiger with soft florals and red fruits but then it opens up with lots of blue and red fruit and lavender florals; smoky and slightly herbal, it’s quite a shapeshifter of a wine on both nose and palate. More juicy and upfront on the palate with cherry, anise and florals, it doesn’t quite have the silky finesse of the Tiger, and leads with acidity rather than tannin (which are slightly sappy and nicely dry), but there’s a real core of rich aromatic fruit driving the wine. The 2017 Chard Farm Mason’s Vineyard Pinot Noir is a different sort of beast altogether-more earth and spice than florals and fruit (though there’s plenty of that there too), with quite a resolutely structured, denser feel. Fruit is darker, showing chocolate, kirsch and spice, the palate is savoury, dry and firm, seeming a little chunkier and fuller-bodied (albeit within the context of three pretty elegant, fine-tuned wines). The tannins are silty, almost with an edge of gravel, acidity is less prominent, and there’s a plusher, quite rounded mouthfeel. Fairly long, this is still not a big wine. It’s elegant and lithe but with a distinctly firmer presence, seemingly built for the long haul. It took a little bit to settle in the glass but as the wines opened up, the Mason’s appeal grew: a savoury, chewier expression compared to the more immediately inviting aromatic, acid-driven, linear Viper and Tiger. Afterwards, looking at notes from an earlier visit to Chard Farm, it was interesting to see that this vineyard is planted predominantly in the Abel clone, which is less common in Central Otago (it’s much more prevalent in Martinborough). Evidently Abel was initially not regarded as well-suited to Central but as vine age has increased (and Mason’s was planted in 2001) it really does seem to be coming into its own.