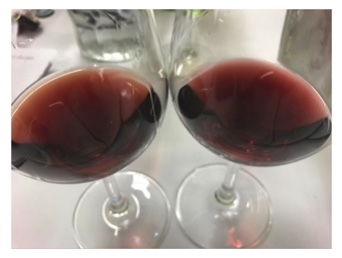 “This is why people think wine people are ***kers.“

I looked at my daughter. She’s been helping me in the office and as we worked together, we’d been discussing how she and her friends rarely spend a lot of money on a bottle of wine (over $12 is a bit of a stretch). Given the choice and budget, most of her friends prefer to buy one of the hard seltzers such as White Rhino instead of wine. However whilst tidying up some magazines and press releases she read out a tasting note for a newly released wine and was incredulous that a paragraph of flowery prose seemed to be the only information offered to entice a consumer to purchase.

“But that’s how tasting notes are usually written and wines sold” I replied. “An adjective-laden paragraph, score and the price.”

“Who has time to read all that waffle? Why don’t you use bullet points? I would like something to say ‘the wine is a. dry, b. fruity, c. ready to drink, d. good/ bad/OK’. I don’t even understand some of these phrases and descriptions – what is nimble acidity?”

I’ve spent quite a bit of time thinking about what she said. She’s in her early 20s, a university graduate, enjoys travelling and is an avid cook who’s more than happy to follow a complicated recipe. Having been raised in a wine drinking home, she has an interest in wine (although it is cursory) but for her and I suspect her peers, the language of wine is a little impenetrable.

Have wine writers lost their focus? Our responsibility should be to communicate with wine drinkers but I’m beginning to think this is not always the case. Rather than connecting with our readers more often it seems we are providing a service to the trade.

Over the past decade the number of column inches devoted to wine in mainstream NZ media has dwindled to a trickle. Where once a wine column would have contained information and qualitative opinion, nowadays most, including those online, are reduced to a brief shopping list of descriptors and maybe a score that doesn’t bear any connection to the tasting note.

When we started the IWM Emma and I had a clear vision that we wouldn’t just write tasting notes but instead give our reviews some context and attempt to say what was good (or not so good) about each wine, and if possible, try to add in some background. Otherwise we’d be just another voice creating generic tasting notes with a dislocated rating. Though in our case, not paid-for ones.

We also took on board one of the criticisms levelled at wine writers ie. that we don’t tell enough stories. I’ve attended plenty of wine events where a guest speaker has implored communicators to tell the stories of wine and not just to write tasting notes. Whether through uninformative tasting notes or a lack of context, wine writers are clearly missing the mark with much of their output.

So it was disappointing to recently contact a producer twice by email and once by phone to try and gain some background on a newly released wine. I was interested to know what had driven the desire to make the wine, who did they see as the target market, maybe a comment on the price. When the producer chose not to reply I didn’t take it further. But it was interesting to then see a review of the same wine online. Though when I say review, it would be fairer to call it a generic tasting note that managed, in three sentences of flowery descriptors, to say very little and leave the reader none the wiser. Is this the future of NZ wine writing? Producers happy to send out wines in the expectation of getting a generic tasting note with a generic rating by return?

It’s not always possible to call every producer who sends us wines. But there are those who it is very rewarding to do so. When I asked about the Muddy Water Pinotage, Nik Mavromatis sent a long email by return giving heaps of background and information. Likewise, a request after the NZW Wine Diaries session to Nick Entwistle at Wairau River meant I could answer a technical question on sauvignon blanc thiols for someone overseas who’d emailed me asking for more detail. Asking about the recent hefty price increase for a long-established wine resulted in a great conversation with the winemaker that gave me plenty of food for thought.

I’d like to think both Emma and I have something to contribute to informing and providing the industry and consumers with well-considered wine reviews in NZ. While admirably succinct, I’m not sure generating bullet point notes along the lines suggested by my daughter is the way either of us wants to go. But neither are we content to write generic tasting notes that we feel don’t deliver useful information either.

Hopefully we can find that middle ground.