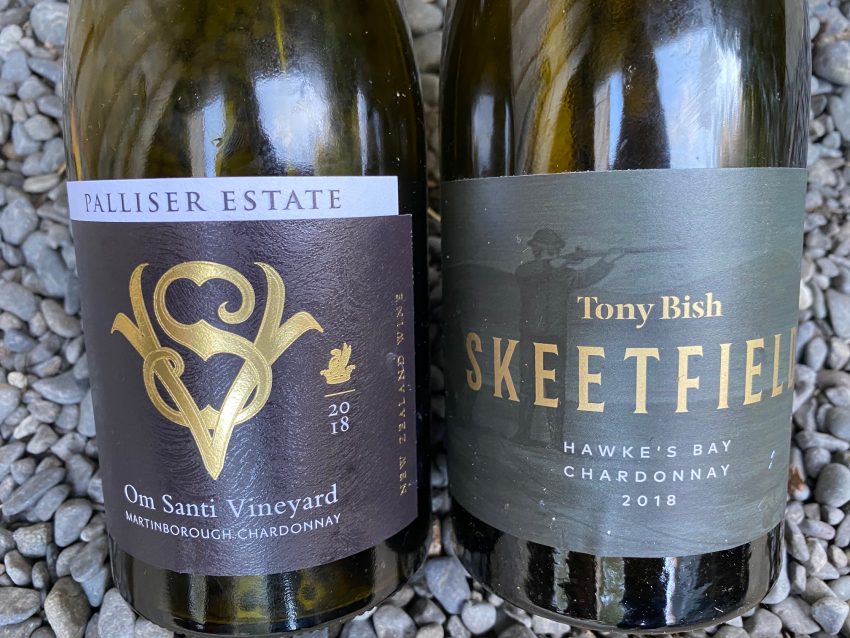 The recent arrival of a couple of high profile 2018 Hawke’s Bay chardonnays piqued my interest and I thought it might be interesting to add another two 2018s from different regions.  It  turned out to be a mini masterclass in the stylistic debate that has been raging around chardonnay the past few years.

The  2018 Palliser Estate ‘Om Santi Vineyard’ Chardonnay  channels a variety-focussed approach with a rich nose of ripe lemon, honeydew melon, peach and vanilla butter, fruit-focused with light bran biscuit notes. A finely-tuned palate with mouth-filling peaches and cream/lemon curd plus a streak of citrussy acidity and subtle French oak. Quite a pure, classic expression, elegant and long with freshness and delicacy. The real focus here is on chardonnay itself rather than clever winemaking, though clearly the winemaker is perfectly clever to have delivered such a faithful and delicious example.

The  2018 Pegasus Bay Chardonnay  could not be a bigger contrast in style: a boldly reductive nose, veering towards rubber but just skirting around it to smoky bacon fat territory. There is fruit there too though, with a lift of white flowers, red apple and peach. Palate is taut, citrussy, and bright-fruited with high, almost bristling acidity. It’s not super concentrated (tricky year) but there’s enough stuffing overall. Appealing but also somewhat uncompromising in its house style; the ever-present reduction makes the wine akin to a vinous rendition of Pink Floyd’s Momentary Lapse of Reason: funky, individualistic and clever, but with a faintly underlying sense of menace.

More normal transmission is resumed in the elegant, graceful  2018 Tony Bish ‘Skeetfield’ Chardonnay  with its lovely medley of ripe fruit and subtle winemaking – white peach, Meyer lemon, banana, roasted cashew, bran biscuit, white flowers. The palate is all finesse, quite delicate with a linear acid backbone. Lovely wine with good freshness, very calm and poised. Not super-concentrated (again, perhaps showing the vintage) but still has good build towards the dry, savoury finish. Its overall balance and grace show everything is in its place and as such it is wonderfully unobtrusive and very satisfying to drink.

The  2018 Villa Maria ‘Keltern’ Chardonnay  sits somewhere between the Pegasus Bay and Skeetfield in style with definite reductive notes, but much more richness of fruit – lemon curd, yellow peach, ripe apple, cashew and clover honey. Intense concentration is the goal here, making it impressive and quite demanding of one’s attention – you can see why it wins so many awards. Deftly-managed oak (barely seen) and juicy acidity lead the wine, there’s lots of fruit richness on the finish with the tell-tale lick of reduction and savoury, biscuitty notes lingering. A bolder, more upfront wine than the Skeetfield, polished and carefully-made, it’s impressive to be sure but also just a touch obvious and ever so slightly relentless.  At the end of the day, the Skeetfield was my dinner accompaniment as its poise and grace made for a more sympathetic partner.

Where once big and buttery ruled the chardonnay world, now leaner more reductive interlopers have  skewed the status quo.  Wines made in the latter style are often the ones rewarded in shows and by critics,  and  the  reduction movement’s  trickle-down effect on style in the overall chardonnay  category  has undoubtedly left some wine drinkers nonplussed. What happened to the chardonnay they thought they knew and understood?

Of course, styles do come and go in wine, and in a youthful industry such as New Zealand’s it is only natural that producers are going to play around with different winemaking techniques (especially those that seem to generate accolades, albeit mainly from the relative echo-chamber of their peer-judged wine shows). Pleasure should be the ultimate yardstick of any wine, via wines delivering harmony rather than ideology or slavery to fashion. It’s true we gravitate towards the comfortably familiar  and as such it’s good to have one’s comfort zone rattled from time to time but it’s also important to ensure wine drinkers are brought along for the ride, rather than delivered something they no longer recognise.

For the most part, the evolution of chardonnay winemaking and style has delivered a far more interesting and complex landscape. The above wines are certainly smart but their diversity in style also neatly illustrates what a potential minefield the once simple world of chardonnay has become for the consumer. Presumably at the price these command, they are bought mostly on name recognition and loyalty, and there’s no doubting Pegasus Bay have been marching down the path of reduction for quite some time.  However, whether chardonnay’s now varying stylistic paths are being communicated to the average chardonnay drinker remains very much up for debate.